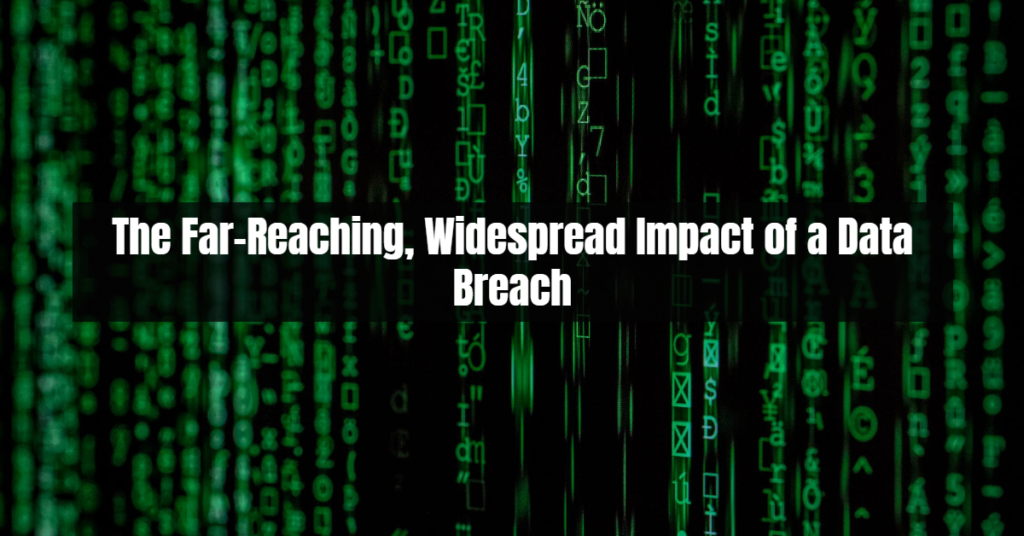 Did you know that in 2019 the World Economic Forum named massive incidents of data fraud/theft and  cyberattacks as two of the top five threats against global stability? That’s right — they came in just behind major natural disasters. The truth of the matter is that data breaches and cyberattacks involving data fraud and/or theft are becoming increasingly more common in our increasingly more interconnected world.

According to recent research conducted by IBM Security, the average data breach will cost a company a whopping $3.86 million. However, data breaches have the greatest financial impact on American companies in particular. The same research found that the average financial impact that a data breach will have on a company in the United States is an astounding $7.91 million. This is the highest cost per data breach globally. But, believe it or not, the financial impact isn’t the only damaging effect of a breach. Data breaches can have a profoundly devastating influence on various aspects of a company which often make it difficult for a business to continue to thrive in the long run. If you’re interested in learning more about the specific ramifications associated with a data breach, then this article is just for you. 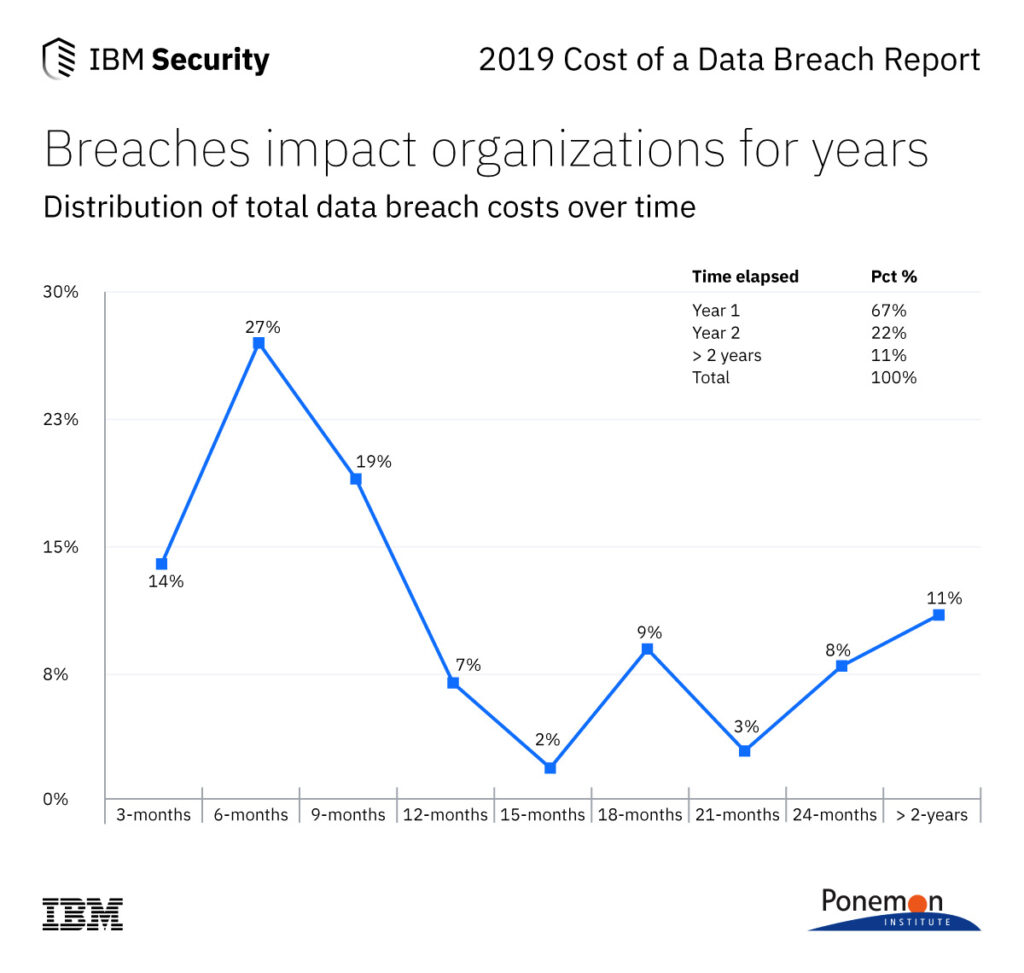 It definitely should come as no surprise that a data breach can have a devastating impact on a company’s financials. There are a myriad of short-term, immediate costs, as well as long-term and indirect costs associated with a data breach which a company must bear the burden of.

For example, there are various laws put into place at the state level which require businesses to disclose pertinent information on data breaches in the event they happen. Are you well-versed in them? If not, you may want to take some time to catch up on some reading. If you are found to have failed to comply with these laws, some pretty hefty fines can be levied against your company. In addition, there are also industry-specific regulations to consider which can further compromise the financial stability of your company in the event they are found to not have been properly adhered to.

Legal fees are a second type of immediate expense. When a security breach happens, sensitive data is often compromised which can serve to be extremely harmful to not just your company, but your customer base. As a result, companies who fall victim to security breaches also fall victim to litigation which includes potentially exorbitant legal and settlement fees.

When a security breach happens, it is a company’s job to immediately take action in order to rectify the shortcomings of their cybersecurity efforts. As a result, additional security expenses are often incurred as well in order to improve their current infrastructure.

Furthermore, data breaches not only directly affect your company, they also affect the public’s perception of your company. As a result, public relations expenses are naturally a part of the game when it comes to mitigating the various effects of a data breach.

As a result, it should come as no surprise that a data breach can have a disastrous impact on a company’s stock value almost immediately. One study conducted by the Ponemon Institute found that a company’s stock prices dropped an average of 5% after an announcement was made of a data breach. However, the good news is that the same research found that companies who had an effective plan in place and were able to respond rapidly and efficiently often saw their stock prices recover quite quickly.

Lastly, data breaches also impact an organization’s ability to generate revenue in the future, thus compromising the sustainability of a company in the long run. A data breach is a PR nightmare and significantly affects how your current customers and potential future customers view your company’s level of trustworthiness. 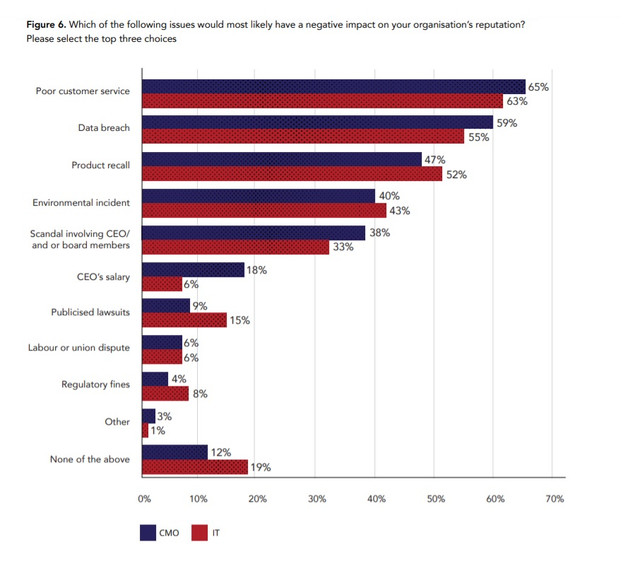 Your company’s brand image, it’s reputation, and the value it holds in the eyes of consumers is everything. A solid brand image is the sum of all perceptions that the public holds about your company’s offerings. An excellent brand image essentially confers a sense of trustworthiness. It tells customers that your company is reliable and that it’s products and services are high caliber. A positive brand image not only increases customer loyalty, it helps to establish your company as a leader within your particular space.

Your brand reputation on the other hand deals with public perception surrounding your company’s operations. Your company may have a great brand image, but does it have a solid reputation for doing business? Do you promote ethical practices? Is your customer service top-notch?

Your brand’s image, reputation, and more impact your company’s brand value. Your brand value deals with the financial significance that your brand carries. It deals with how much your company is worth on the market – how much someone is willing to pay for your product and/or services.

When a data breach occurs, your financials aren’t the only aspect of your company that are affected. Your brand as a whole is compromised – image, reputation, value and all. Unfortunately, a data breach is one of the single greatest threats to your brand. According to recent research, a whopping 71% of communication professionals felt that the single “greatest cost” of a data breach was the damage that it had on a company’s brand value.

Your company’s brand value not only affects customer retention and turnover rates, it also affects your ability to generate future sales and business opportunities. Furthermore, it affects investment opportunities and stakeholder trust.

This is one of the many reasons why it’s essential to have a proper strategy in place. It takes a company on average 196 days or approximately 6.5 months to detect a data breach and around 69 days to fix it. However, research conducted by IBM Security found that companies with incident response plans saved an average of $340,000 per data breach. The same research also found that business continuity management saves a company an average of $13 per record breached.

Furthermore, as we mentioned earlier, companies who are able to effectively and efficiently respond to data breaches tend to rebound much more quickly both in the public eye and  the stock market after such an incident occurs.  A data breach undoubtedly has a disastrous impact on a company’s brand reputation, image, and value, but it’s response to it is perhaps, arguably, even more important. 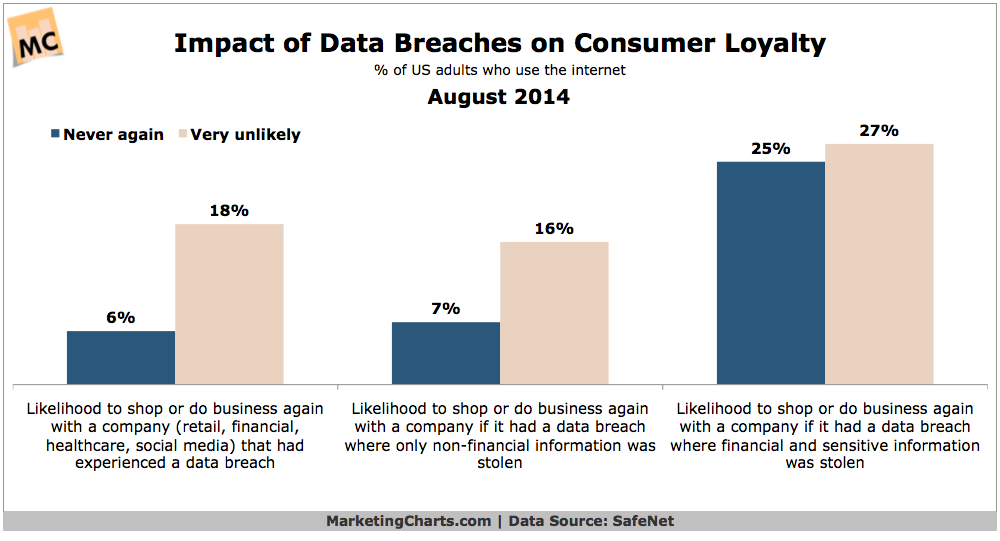 Did you know that 79% of customers feel that it is an organization’s responsibility to take “reasonable” measures to secure their personal information? Furthermore, 73% of customers feel that it is a company’s “obligation” to control access to said personal information. When your customers do business with your company, they are putting a great deal of trust into it. This decision is often a complex one which has been influenced by numerous factors, but trustworthiness is undoubtedly one of the most significant ones. After all, no one is interested in handing over sensitive, personal information to a company they don’t feel certain will properly respect and protect it.

When a data breach occurs, your customers experience a sense of betrayal that often compromises their willingness to do business with you in the future. According to the Ponemon Institute study, 65% of customers surveyed claimed that they lost trust in a company after a data breach. Furthermore, 27% of them went even further to say that they completely discontinued their relationship with the company altogether.

A data breach not only significantly impacts your current customer base’s trust, it affects public perception of your company’s trustworthiness and as a result, also negatively impacts your ability to acquire customers in the future. As a result, a data breach can have a significant and negative impact on your company’s customer retention rates, as well as it’s turnover rates. In fact, according to recent research, the average global turnover rate for a company which falls victim to a data breach is 3.9%. There are numerous direct costs associated with data breaches, however, it’s important to also keep in mind the various indirect costs which can also have a profound impact on a company’s viability. The truth of the matter is that no matter which way you roll the dice, your company simply just can’t afford to fall victim to a data breach.

We all remember the Equifax scandal. Just three short years ago in 2017 the company fell victim to a disastrous data breach which compromised the private information of over 145.5 million individuals. We’re talking everything from social security numbers to driver’s license numbers, dates of birth, and home addresses. To put things into perspective, 145.5 million individuals in 2017 was roughly 44.75% of our nation’s entire population at the time. If we weren’t aware of just how vital cybersecurity was before then, we certainly were from that point on. When it comes to cybersecurity, the stakes are high and now more than ever, especially during the pandemic, it’s important to ensure that your company remains well fortified.

What have you learned recently about data breaches that you found surprising? Let us know in the comments below! We’d love to hear from you.