Clubhouse 101: A Guide to the Year’s Hottest New Social App 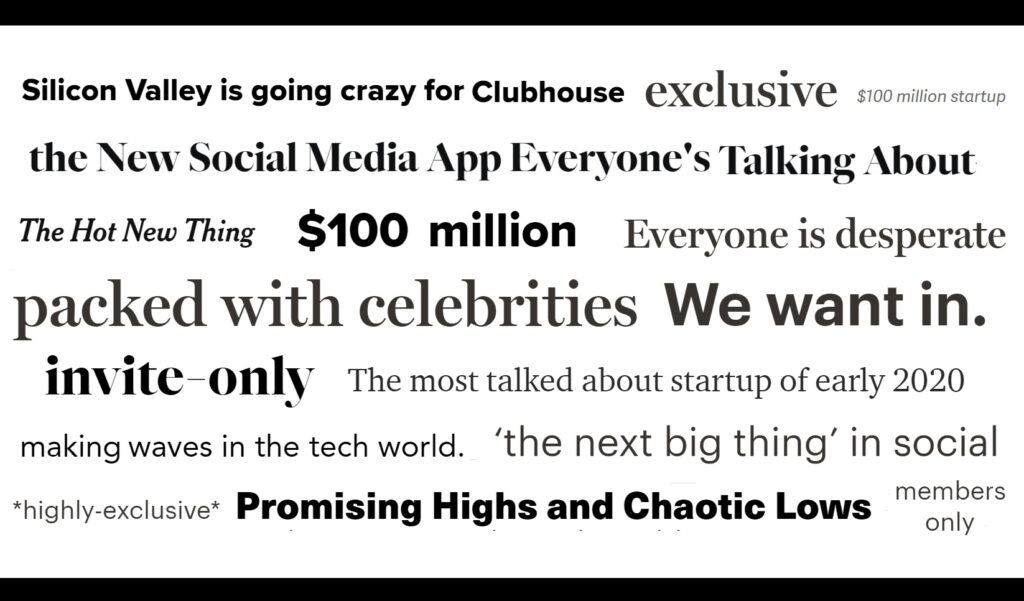 If you were to peruse articles online about the platform Clubhouse, you would most likely come to the speedy conclusion that it is pretty much the coolest thing to happen to us since sliced bread. Media outlets such as The New York Times, CNBC, The Seattle Times, and Oprah Magazine are all hailing it the “hot new thing” that “Silicon Valley is going crazy for” and “everyone’s talking about”.

So, what exactly is it?

If you’re interested in learning more about the newest social media kid on the block that everyone is talking about, then look no further than these next few lines.

Clubhouse is an audio-based (or voice-based, depending on how you look at it) social media app started in early 2020 by former Google colleagues Paul Davison and Rohan Seth. Seth is a former Google engineer and Davison is the man behind the now defunct “people discovery app” Highlight ,and the short-lived camera roll sharing app Shorts.

The two quickly gained support from Silicon Valley and numerous investors with their idea to build a social media platform which focused on bringing individuals together by fostering meaningful discussions.

That’s right – Clubhouse instead focuses on good-old fashioned conversation – an interesting deviation from the norm.

In early 2020 the pair gained the financial support of venture capital firm Andreessen Horowitz and by May, the company was estimated to be valued at a whopping $100 million.

And apparently the investment has been worthwhile.

Accounts from the beginning of the year reported membership at 3.5k, but that number quickly grew to 10k by October and, according to Glamour UK, rapidly ballooned to over 100k by the middle of December. Bear in mind that this is all while the product is still being beta tested. That’s right – it’s not even open to the public yet. So, what exactly is the attraction? 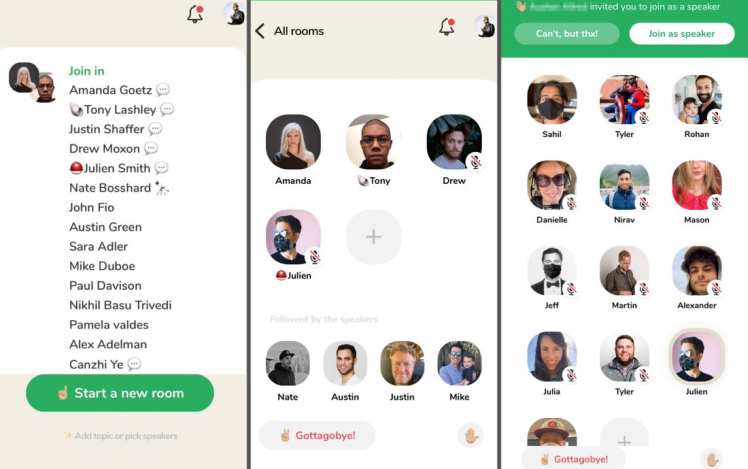 The overwhelming appeal of Clubhouse in a socially distanced, quarantined society

It could be said that the creators of Clubhouse couldn’t have picked a better time to start beta testing their product. Part of the appeal of the niche app is that it draws upon unique, spontaneous, yet intimate connections that many of us all crave in a socially distanced, quarantined society.

Many users liken the experience to that of walking into a party or bumping into a stranger at a coffee shop and striking up a conversation with them. It feels like a real social event because at its very essence, it is.

Unlike Facebook, Instagram, or other platforms, users don’t rely on images, photo editing apps, video or cameras in order to share their experiences with the community.  There are no profile pages, walls, or lengthy explanations of who’s present.

The platform is instead sub-divided into various rooms (including a “global room”) which are headed by “speakers”; an environment which hearkens back to the age of AOL chatrooms.

When someone opens the app, it sends out push notifications to everyone on the platform. Users can join in on a room to listen, participate in the conversation by raising their hand, break into smaller side discussions, or create their own room entirely where they serve as the moderator.

Even more interesting is the fact that you don’t need to stay glued to your screen in order to participate. You can simply jump into a conversation, press mute and listen, or feel free to chime in as you like.

Conversations on the platform range from structured political discussions and debates with celebrity speakers, to loosely organized chat rooms where people convene to have random “Back of the Bus” conversations out of boredom.

There are book clubs, fireside chats, comedy shows, jam sessions, and people talking about everything from the latest Supreme Court decisions to the struggles of working from home during the pandemic.

It’s a place to tell stories, to share experiences, and according to the creators, one where “people from all walks of life can find common ground” and “form uniquely human connections with others”. Even our CEO, Gavriel Legynd @gavriellegynd is on Clubhouse and seems to enjoy the app!

The platform doesn’t record conversations and as a result, participation, or lack thereof, conjures up a sense of urgency or fear of missing out. But, it also creates a sense of privacy and exclusivity.

In fact, the platform is being touted by many as not only “highly exclusive” but “invite-only”. The creators on the other hand say that this is far from what they intended.

According to them, the exclusivity of the app is primarily predicated upon the fact that they are still currently beta testing it. Rather than prematurely rolling out the product to the public, Seth and Davison instead say they want to focus on building the community slowly so that they are able to properly fine-tune it as their user base grows.

Also, they’re bare-bones in terms of staff (not funding).

According to their latest update, they are currently the only two full-time staff and they simply haven’t finished building out features which will allow the platform to operate on a large scale.

However, this hasn’t stopped the app from gaining a strong celebrity presence – another part of the platform’s appeal. Users who log in can listen to or participate in discussions with the likes of heavy hitters such as Oprah, Ashton Kutcher, or Jared Leto.

Comedians such as Tiffany Haddish, Chris Rock, and Kevin Hart have made appearances, as have music industry icons such as Drake, 21 Savage, Estelle, and Lupe Fiasco. There have also been discussions led by activist DeRay McKesson, writer Shaka Senghor, Van Jones, Mark Cuban and Grant Cardone. 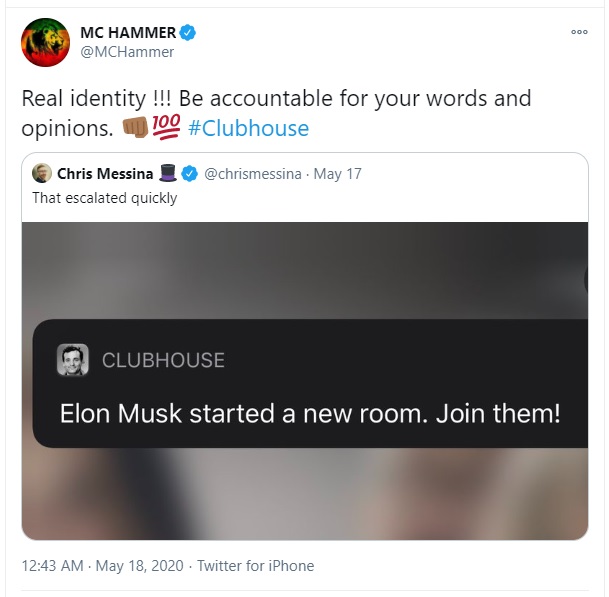 Much like many of their social media counterparts, Clubhouse has also been hit with a few waves of controversy.  According to Bloomberg, the platform has, among other things, “drawn ire for its policies on harassment”. This stemmed from not one, but two rather high-profile incidents in particular.

The first incident happened a few months ago in September during a discussion which was titled “Anti-Semitism and Black Culture”. The discussion, which garnered a few hundred participants was accused for “invoking negative Jewish stereotypes”.

The bad publicity eventually caused the moderator of the conversation to issue an apology on Twitter, which followed with an official response from the Clubhouse team condemning “Anti-Blackness, Anti-Semitism, and all other forms of racism, hate speech, and abuse on Clubhouse”.

In another incident, New York Times writer Taylor Lorenz detailed her unfortunate experience on the platform.

According to Lorenz, she joined in on a conversation about herself which ultimately led to her being harassed on the platform by other users. Lorenz also stated that she found herself in an all-too familiar situation where she, as a woman, had a hard time being recognized as a speaker in the larger male-dominated rooms. She also lamented about the fact that she was met with a great deal of “anti-media sentiment”.

In yet another incident, a user jokingly decided to temporarily change their profile by identifying themselves as Apple’s chief executive, Tim Cook. However, this led to a number of individuals following the hoax account under the assumption that it was the real deal.

There was also an instance where an individual impersonated Tesla founder Elon Musk. This all ironically led to a very public post by none other than MC Hammer where he rallied for the creators to implement a real name policy.

A need for improvement

Needless to say, the platform clearly still has a few kinks to iron out before they’re ready to go public. While the creators insist that incident reports are investigated and acted upon, they also claim to be well aware that there is a serious need for broader content moderation. However, they’ve assured the public that they are building a team of advisors and improving upon the reporting function so that it is more robust.

There is also a need for stronger, more detailed community guidelines. According to the creators, they’re still working out the nitty gritty details on how to properly evaluate complaints of abuse, bad behavior, or harassment – something that can prove to be particularly tricky when conversations aren’t recorded.

They’re also working on creating more solid in-app safety features. Currently, when users sign up they can input their email in order to help verify their account and add an extra layer of security. However, the platform is still deciding on whether or not to roll out blocking features, or store conversations on a server in order to help with complaints investigation.

Another point of concern the creators have mentioned is their desire to develop tools which encourage inclusion. In their latest update, they expressed an interested in how to best collect data in order to help identify different group experiences and how they influence and impact the platform.

According to them, the goal is to ensure that every individual has a voice and to make certain that their rooms don’t become “echo chambers”, but instead foster a sense of safety and inclusion as opposed to one of exclusion.

The social media platform Clubhouse has grown quite rapidly since it’s inception in early 2020. While the budding platform has garnered some enviable praise and financial support, it hasn’t remained insulated from controversy and criticism. However, one could say that this is just the beginning for them and we’re eager to see what 2021 brings to the era of audio-based social media.

Are you interested in learning more about the impact that social media can have on your company? We offer both social network development and social media management services for businesses of all sizes. Contact us today to see how we can help take your business to the next level!