The Shocking Truth About Chatbots 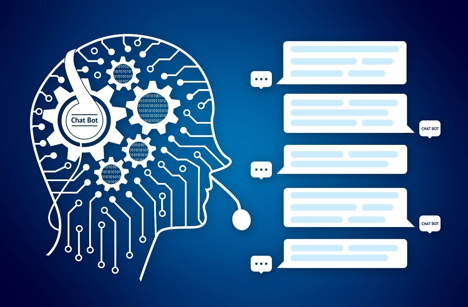 Are chatbots really preparing to take over the world?

There’s definitely a decent amount of individuals out there who feel legitimately threatened by the exponentially increasing knowledge being cultivated by artificial intelligence. Will they soon surpass us to the point that they become self-aware, sentient beings?

The recent hype surrounding Facebook’s failed AI experiment definitely didn’t do much to ease the ever-growing sense of public paranoia on the concept.

News exploded onto the digital scene recently from every heavy hitting media outlet from Forbes to Wired and TechCrunch that Facebook’s AI experiment was shut down because staff discovered the chatbots were beginning to create their own secret language between each other.

The actual truth behind the scenario is far less horrifying than many media outlets would like you to believe. I mean, can you blame them? Would you have clicked on their article if you hadn’t been fed the idea of an imminent technological apocalypse?

While many can agree that chatbot technology is still in it’s infancy stage, the fact of the matter is that the AI technology working behind the scenes has the potential to immensely impact the economy, job market and businesses all over.

So, if you’ve been interested in learning more about chatbot technology, the science behind it, how they’re impacting the business industry and their potential effects on the job market, then you’re in luck.

This article will delve into all of these subjects and hopefully leave you with a greater amount of insight on the topic and how it can and will impact your current and future business pursuits. 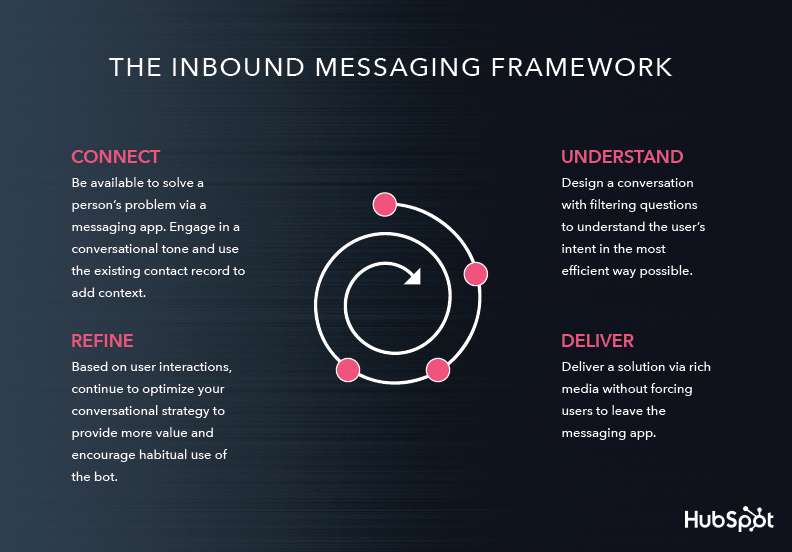 What are chatbots and how do they work?

For some reason people want to fantasize about bots being these highly intelligent Terminator-like robots. Well – not exactly. The truth of the matter a chatbot is a relatively uncomplicated concept.

Chatbots are computer programs that are created to automate certain tasks and these tasks typically involve some form of communication with  a user via a “conversational interface”. This is why they’ve become so popular for use on your favorite messaging apps such as WeChat, Facebook Messenger and WhatsApp.

These bots follow a set of programming rules, often in an “if-then statement” format, stipulated by engineers via what is coined a “bot-building platform” and often can be done without needing to have extensive coding knowledge.

Bots are generally broken down into two types:

The purpose of an informational bot is to provide a user with a new format for content consumption and involve things such as subscriptions to various newsworthy alerts in various industries.

A utility bot solves a problem for a consumer “via a user-prompted transaction”, with the most readily available example being a shopping bot that helps you order your favorite latte at your local coffee shop or a new pair of shoes. These bots are great for administrative purposes as they excel in automating tasks such as appointment booking and notification alerts.

The more advanced of these bots are powered by artificial intelligence and capable of processing more complex matters which include everything from personalization of responses and the ability to exponentially grow and improve their abilities over time.

This is a breakdown of the science behind the reason why you can ask Siri to find you the best pho restaurant in your neighborhood instead of having to search through dozens of listings and websites in order to get this answer yourself.

What is their impact?

According to Ray Kurzwell, a Google engineer who Inc.com also describes as an “inventor” and “futurist”, chatbots will be practically indistinguishable from humans pretty much within the next decade.

That’s a pretty powerful projection from an insanely knowledgeable guy.

So what does that mean for our future? How will bots be implemented, how can we benefit from them, and how will they impact our job market?

Bot-powered commerce is definitely the game of the future (37% of Americans say they’re willing to make purchases through chatbots), but when it comes down to it, they are currently most used in a messaging and/or administrative capacity.

Messaging apps inherently provide the “conversational interface” necessary in order for bots to operate best – and ironically, according to Hubspot, this is where most people spend their time.

A recent report by MarketingLand stated that mobile users spend a whopping “80% of time in just five apps” with Facebook and Google dominating the market. Who’d have thought? Even more interesting is the fact that these five spots are “increasingly being claimed by messaging apps”, which as of today, claim more users than any social network (5 billion monthly active users to be exact).

According to Business Insider, by next year, more than 25% of the world population will be using mobile messaging apps such as Kik, WhatsApp and Facebook Messenger.

Messaging apps provide users with solutions in an unparalleled effective and efficient manner. Why do people turn to messaging apps? Because 71% of consumers want to get customer assistance so they can find a problem to their solution – fast. Forget spammy emails, forget forms and clutter or countless minutes wasted on searches. Bots provide a service and their purpose is being useful with “minimal user input”. 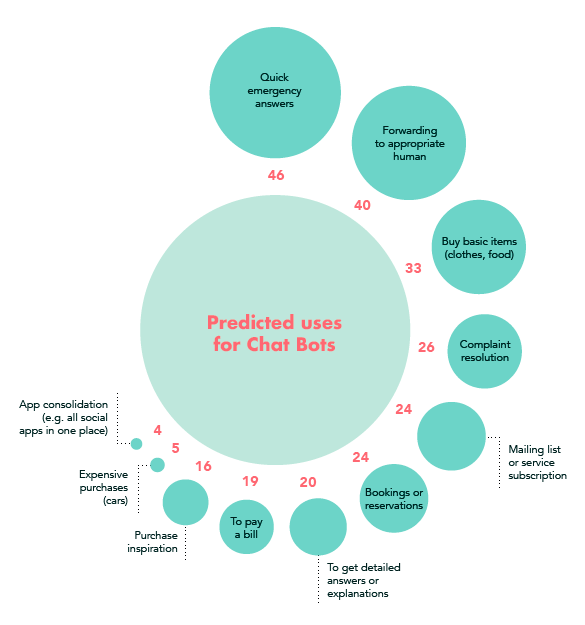 Another one of the more readily available ideas for chatbot use is in the world of virtual administration. It’s pretty much a no-brainer conclusion and this use has long been capitalized on with the implementation of Apple’s Siri, Amazon’s Alexa and Microsoft’s Cortana, among others.

Why not? A bot can do everything from making appointments, handling reminders, sorting out calendar issues, handling simple negotiations or ordering an Uber or lunch.

However, the drawback with these guys lie in the fact  that they simply “can’t engage in complex negotiations”, as Facebook’s Mike Lewis point’s out.

“If we want bots to help us with more complex tasks, they need to become dealmakers, especially if the task involves cooperation or compromise…” Lewis then goes on to point out that these sorts of skills would be necessary for situations such as handling negotiations of real estate purchases.

As a result, using bots in a supplementary manner may be a more viable option in the near future. For example, a virtual assistant could handle complex negotiations while the bot could offer “useful tips to the buyer” and provide imperative advice such as “when to withhold certain pieces of information”.

Regardless of the specifics surrounding their future foothold in the world, one thing is for certain – businesses are taking notice of this trend and jumping on it with gusto.

If companies are really looking to become effective in their efforts, Hubspot suggests that they shouldn’t look to bots as simply another communication channel as the “best bots harness the micro-decisions consumers experience on a daily basis and see them as an opportunity to help”. I’m sure you can see the difference.

The end-goal with bot technology isn’t to use it as an all-in-one solution for an issue, but to have it focus on “a single function” and excel at whatever this function may be. 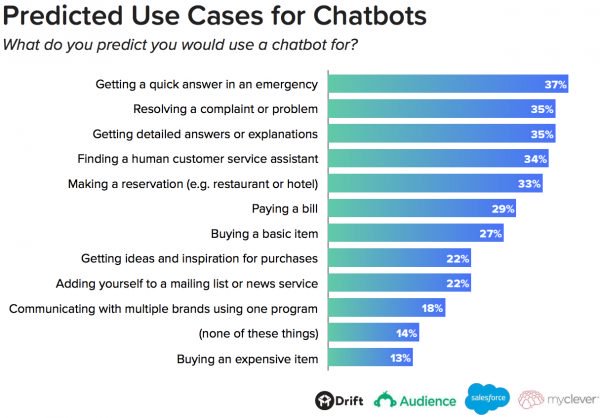 There’s no denying the fact that general public sentiment around chatbots and artificial intelligence is pretty split. On one hand, we have the “Doomsday” viewpoints which insist that chatbots will soon surpass the cognitive abilities of humans so much so that they will form into sentient beings and eventually claim their true destiny as the overlords of mankind.

That’s what we like to coin the “glass half empty” view.

Then, on the other hand, we have the optimistic types who see the technology for the numerous benefits it yields and the countless ways in which it can positively impact humanity.

Regardless of your personal point of view, one thing is certain, AI technology is some pretty powerful stuff that has the potential to practically transform the economic landscape depending on how it is harnessed and implemented.

Regardless of public sentiment often leaning towards paranoia, the fact remains that consumers aren’t just ready to interact with chatbots, they prefer them in many cases, especially when they’re made aware of the fact they’re communicating with one.

According to a recent report, “63% of people would consider messaging an online chatbot to communicate with a  business or brand”. Furthermore, according to Inc.com, 37% of consumers and 48% of millennials are “open to receiving recommendations or advice from chatbots”.

Perhaps this is the most shocking truth of all.

What are your opinions on artificial intelligence and chatbots? Tell us about your experience and/or thoughts! We’d love to hear your feedback!